Why do alumni/advancement offices have conflicts with the athletics department? New survey data shows some unexpected results.

About a 6 minute read.

My most recent article referred to data from the VAESE Alumni Relations Benchmarking study, indicating that 43% of alumni organizations report they have conflicts with their intercollegiate athletics department.

I reached out to alumni professionals, hoping to collect some information about what was causing these conflicts. But no one wanted to go on the record, or even talk about their issues publicly.

So to get at the source of these tricky issues I created this anonymous online questionnaire to provide a venue for alumni/advancement professionals to share their experiences. (if you haven't taken this brief survey, please do by clicking here!) fortunately, we received enough survey responses to obtain statistically valid results.

I then spoke to a handful of alumni professionals who were willing to talk to me at length about the results. Many share their own experiences and insights. I also had a great conversation with a college president with decades of experience in dealing with these types of conflicts at several institutions. In each case, I promised not to reveal their identities.

The survey asked a series of questions about the relationship between alumni and athletics. While the survey offers some valuable insights into some of these issues, admittedly the sample size is smaller than the VAESE study, resulting in a lower confidence level overall. That being said, there is still much we can learn from this survey.

Here are two of the most significant findings of this research:

While not conclusive, the survey revealed a correlation between the length of tenure of senior alumni executives and the diminishing quality of the relationship with athletics.

What would account for alumni professionals rating their relationship as better than how the athletic director would rate the relationship?  Maybe it’s our fun, optimistic, fun-loving nature?

To find an answer, I analyzed the data, controlling for a number of factors. This next bit of statistical data stands out as most significant:

From the viewpoint of alumni relations professionals, when controlling for the senior alumni executive’s term of service,  the survey results show a correlating decrease in the quality of the relationship between alumni and athletics. However, when controlling for the term of service of the athletic director,  the rate of decline is far less pronounced. 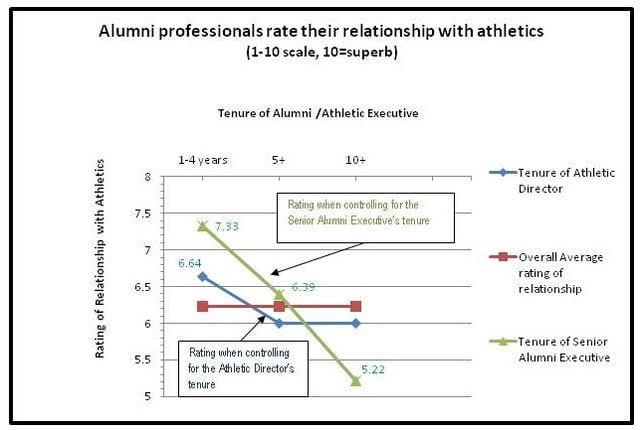 What’s the significance of this metric?  I’m not sure, frankly. I was surprised at this finding, and believe it will require more study. It will certainly be addressed in the next VAESE survey that will be sent out in November.

But if this data is confirmed in VAESE study, it will challenge some of my own biases about athletics, and those who are attracted to this line of work. For example:

This gap would indicate that, for a host of reasons, athletic directors spend fewer years at the helm than do senior alumni executives. But the effect of that gap can have a significant impact on the power structure at any institution.

That's because the longer any executive is in place, the more likely they are to consolidate power and have greater influence. As is often the case, in the course of an extended length of service of an executive, power is often associated with the position, leaving a successor with many of the same persistent influences within the institution. This applies to all executive positions within the institution, not just alumni or athletics.

So if the relationship between alumni and athletics is more negatively influenced by the tenure length of the senior alumni executive; and less so with the tenure of the athletic director, it could be the result of natural influences common to most institutions.

Having come from the alumni relations and advancement realm, this data exposes my bias. I have unwittingly made the assumption that the behaviors, personality and “competitive DNA” of athletic directors are a major causes of the conflict between alumni and athletics. But it appears that it may be just the opposite. Maybe entrenched alumni executives need to be more aware of how they compete for resources and wield their campus influence? Of the many alumni executives I know, few would want a reputation as being the one unwilling to play nice in the sandbox.

As an example, when a senior alumni executive reports to a VP, and athletics report to the president/chancellor, conflicts seem to be much more prevalent. And it doesn’t matter whether athletics or alumni report to the higher level. When either have an unequal direct report, conflicts appear to be more common.

The survey revealed this situation is more prevalent among NCAA D-II and D-III institutions. Interestingly, two of the alumni professionals I spoke with came from D-II and D-III institutions. Both believed that the NCAA required athletic directors to report directly to the president, and it was a big reason they felt helpless to resolve their issues. However, I found this document (a guide for new D-III athletic directors) that contradicts their assumption, and is clear that the athletic director should report to a vice-president/vice chancellor. But since both mentioned this issue, I suspect there is some level of confusion.

Interestingly, my interview with the college president revealed his strong opposition with any policy that requires athletic executives to report directly to the president. He believed the president should have a level of separation from athletics, if for no other reason than to insulate him/her from any conflict or issue that may arise.

This is my initial assessment. I welcome your interpretation of these statistics. 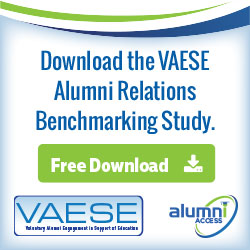